Bernie Sanders spent the last couple months of his primary campaign talking about having “a clear path to the nomination“, and fighting for it to the bitter end.

But here’s the thing: when Jill Stein recently invited Sanders to talk with her about the Green Party’s nomination for President, it offered “a clear path to the Presidency” for him, not just the nomination. Let me spell out for you the scenario that occurred to me.

First, the Green Party will likely be on the ballot in 47 states, including all of the big ones. The very moment Sanders accepted their nomination he would almost certainly be polling at 15-20% (and rising!) and thus would be automatically included into the televised debates.  The “rules” state that a candidate must poll at 15% for some weeks before the debates.

Sanders has been acutely aware of the “spoiler” argument, the idea that if he runs he will take votes away from Clinton and cause a Trump Presidency.  Nadar is still being used as the whipping boy for “spoiling” the election for Gore in 2000, even though Gore won the popular vote and Bush was awarded the Presidency by a tortured Supreme Court decision.

Nader wrote in an op-ed published by the Washington Post March 25, 2016,

As one of the more successful third-party presidential candidates in recent U.S. history, I know firsthand the obstacles Sanders might have faced if he had run as an independent. The reality is that Sanders is right, and the backlash against him reflects all too well what two-party tyranny can do to a more-than-nominal third-party challenger. This is especially true of candidates like Sanders, who — despite advancing political views similar to the classic Democratic New Deal platform — now sits well to the left of the party’s corporatist, hawkish establishment.

This spoiler argument has been used successfully to scare people into voting against their own interests again and again.  But there’s more afoot in 2016 than just Bernie.

The Libertarian campaign of Gary Johnson and WiIliam Weld is already polling above 10% and a July CNN poll has them at 13%.  Some high profile Republicans who will have nothing to do with Trump have endorsed the Libertarians (Ron Paul, former U.S Representative from Texas and Jesse Ventura former Governor of Minnesota) and other high profile Republicans have boycotted the convention (Mitt Romney, the Bushes). Who else would these anti-Trump Republicans vote for?  Clearly, the Libertarian Party candidates will take votes away from Trump. Ah! there is a balance in “the force,” as Star Wars fans might say.  Gary Johnson takes votes away from Trump and Sanders takes votes away from Clinton!

Clinton and Trump are both particularly unpopular candidates for the Presidency. 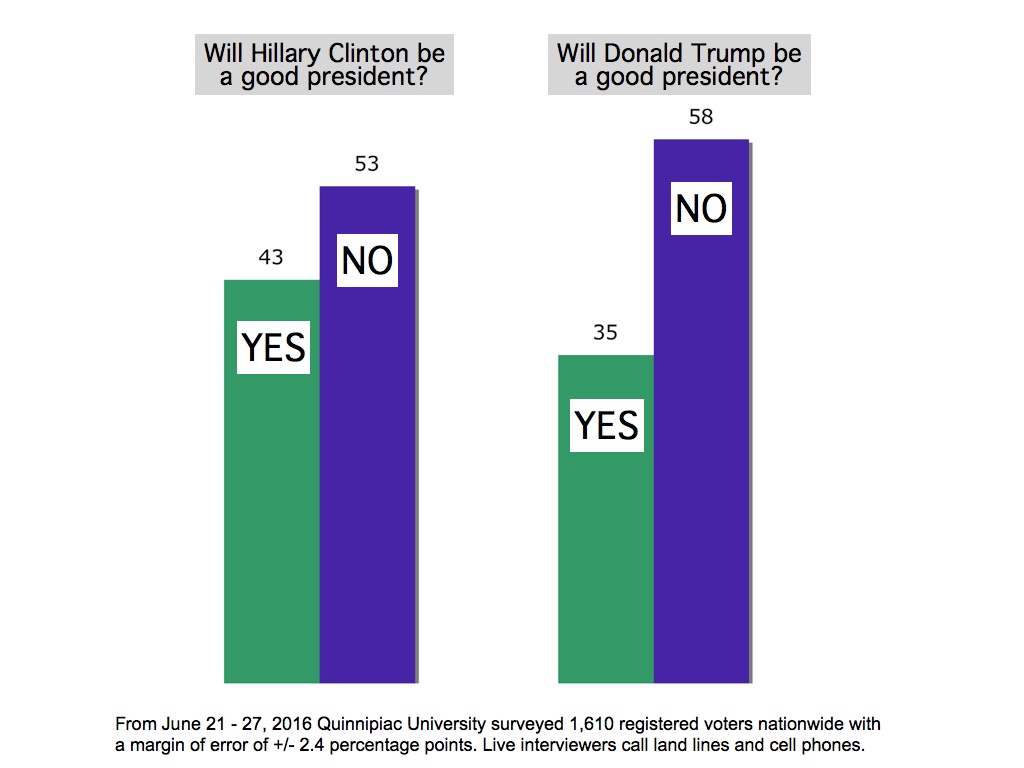 Eighty-one percent of Americans say they would feel afraid following the election of one of the two polarizing politicians, according to a new Associated Press-GfK poll. That includes a quarter who say it doesn’t matter who wins: they’re scared of both.

Maybe with a little encouragement/support from Sanders, Gary Johnson could join him on that debate stage making this year a 4-party race for the Presidency.  The spoiler effect is negated and Sanders is freed to pursue the political revolution.

With Sanders demonstrated strength among independent voters, who now make upwards of 40% of the electorate (more than either major party–see chart below) and with a machine of his own with many millions of enthusiastic supporters that has been developed into an effective force over the past year, one-third of votes cast across the nation is well within reach. 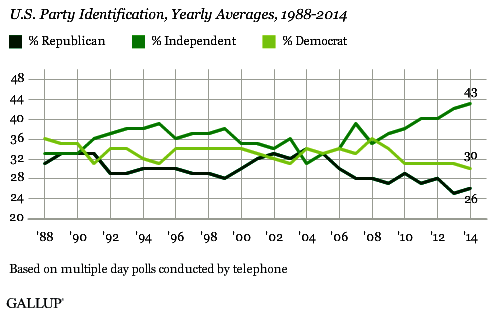 There is no requirement that any candidate receive an outright majority of the popular vote to win.  In a competitive 4-way race, you just have to come in first to get the Electoral votes. So all Sanders needs to win is 30-35% of the popular vote in most states.

How is that not “a clear path to the Presidency”?

Of course, Sanders has said from the start that he would support the eventual Democratic nominee, for which I call him the “anti-Nader”. Nader himself supported Bernie’s campaign and if Sanders joined with the Greens, I, and thousands like me, would work tirelessly on his behalf. But does party loyalty trump the “political revolution” that he built and nurtured in such an unlikely but exhilarating fashion? Is he walking away from a nomination that the national media and the Democratic “machine” stole from him “fair and square?” Is he walking away satisfied that he has done all he could? Is he really all right with a minor “supportive” role in this year’s election, shilling for a candidate he thoroughly discredited over the past year?

While I haven’t been Bernie’s biggest fan because I’m not a Democrat, and while I very much liked his message and am grateful for his heartfelt efforts, I wouldn’t join that party on a bet. If I see the possibility of the scenario described above, its hard to believe his campaign advisors haven’t seen it, discussed it with him–and discarded it.  Why?

What I’d like to know is why shouldn’t Sanders continue the “political revolution” and win the Presidency for us? The numbers are in his favor. The Democratic Party has treated him so badly that he should feel no obligation to them. It’s not too late to jump ship and be the Green Party Presidential candidate. That way we, the 99%, might still have “A Future to Believe In” instead of the nightmare to fear from either of the major party nominees.

← Identity Politics Gets Hoisted by Its Own Petard
Beyond Bernie: Three Takes →