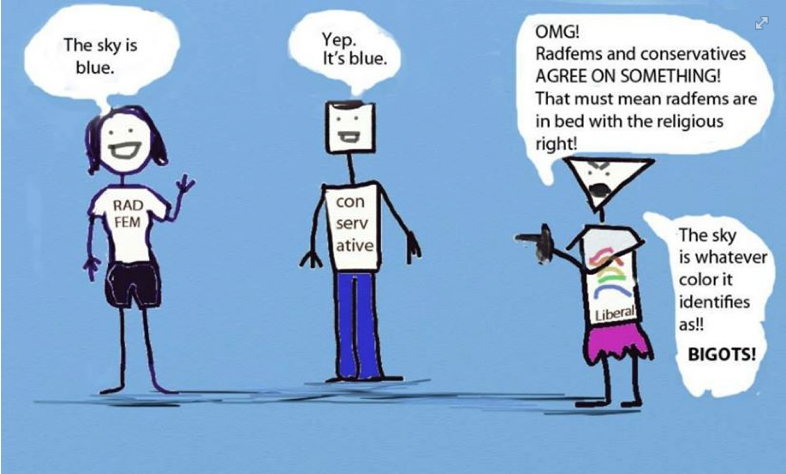 In May of this year, the federal Departments of Justice and Education put out a “Dear Colleague” letter giving federal “guidance” to schools across the country that are wrestling with how to handle the demands of transgender students.  In the letter, the government says it is extending protections against sex discrimination guaranteed by Title IX of the Education Amendments of 1972 to cover discrimination on the basis of gender identity. And they note that any school failing to accommodate transgender students may lose their Federal financial assistance.

Also in May, the New York City Commission on Human Rights put out “guidance” requiring employers to use people’s preferred name, pronoun (her, his, their, ze, hir) and title (Mr. Ms./Mrs. ) regardless of the individual’s appearance or the sex indicated on the individual’s identification. “[C]ivil penalties up to $125,000 for violations, and up to $250,000 for violations that are the result of willful, wanton, or malicious conduct” can be assessed in New York. In an opinion published by the Washington Post, UCLA Law professor Eugene Volokh pointed out, “So people can basically force us — on pain of massive legal liability — to say what they want us to say, whether or not we want to endorse the political message associated with that term, and whether or not we think it’s a lie.”

Both of these governmental actions are heavy threats requiring all citizens to suspend any sense of material reality and fall in line with the new orthodoxy.

The directive from the Departments of Justice and Education turns a blind eye towards the fact that protections for girls and women against sex discrimination (the intent of Title IX) and protection against discrimination towards transgender people can sometimes be at odds.  The Women’s Liberation Front, a loosely organized international feminist group of which I am a member, is filing suit against the U.S. government on the basis that equating sex and gender identity under Title IX harms women and girls.

Title IX is most famous for its effects to level the playing field for women in sports.  Thinking about women’s sports, the question immediately arises, is it fair for someone to join a women’s sports team who was born male and socialized as male until a certain age?  Does it matter if this male-bodied person experienced regular teenage male hormone secretion, muscle and bone development?  Should such transgender students be required to have taken cross sex hormone treatments for months or years before competing on a women’s sports team?  The Dear Colleague letter says “Under Title IX, there is no medical diagnosis or treatment requirement that students must meet as a prerequisite to being treated consistent with their gender identity.”  This means a fully developed male could join any women’s sports teams if he claims to identify as a woman.  The Women’s Liberation Front argues this is a harm to women.

I was a Title IX beneficiary as a high school athlete.  I was a competitive swimmer, and before Title IX, boys and girls swimming were treated very differently.  The boys had the best of everything: pool time, athletic gear, ribbons and trophies.  We girl swimmers wore old worn out sweats with holes in them that were emblazoned “boys track.”  We did not get ribbons or individual trophies at swim meets.  Athletic scholarships to college were almost unheard of for young women.  In 1972 all of a sudden everything changed.  We got brand new sweats with “Girls Swimming” written on them and there were changes throughout the program.  This is just one small personal experience with good changes brought about by Title IX.  Nationwide the changes on the high school and college level were huge for women in sports with women’s participation in sports increasing phenomenally and women becoming stronger and better athletes.

But Title IX has been used for much more than just ending discrimination for women in sports.  It has been employed to stop discrimination in college admissions and in the hiring of female professors, to end sex segregated classes like wood shop and home economics, to challenge sex stereotypes in classroom materials, to fight sexual harassment, and recently many young women have used it to sue their colleges regarding the handling of rape cases.  Title IX has been an important reform promoting women’s liberation.

This means schools could maintain sex-segregated bathrooms and locker rooms as long as they also provide bathrooms and locker rooms open to everyone.  This would require some major adjustments in schools everywhere.  Such adjustments reminds me of the Americans with Disabilities Act of 1990, where accessibility requirements meant that bathrooms and building entrances had to be reworked at great expense to schools and other public, and even private, accommodations.  But the federal government is not offering to defray the costs of reconfiguring these intimate spaces and providing a gender neutral option has not been the response by most schools.  Transgender students are demanding to be allowed into the facility that matches their chosen “gender” and schools are moving to accommodate these students, even though it negatively impacts female students primarily.

Moves to open locker rooms to everyone result in schizophrenic social messages to girls.  On the one hand we are raised to be modest, one does not show one’s breasts or genitalia to anyone except intimate partners. Some exception is made for locker rooms where one is expected to undress and shower in a group facility but up until now these were sex-segregated areas.  Still, it has always been awkward for most teenagers.  Now we as a society are telling girls and women that they should be fine with disrobing and showering with male-bodied people because these people don’t identify as male.  We say to teenaged girls: don’t worry about voyeurism, don’t be such a prude about looking at penises and testicles.  This position gets even crazier when you understand the concept of “gender fluidity.”  Gender fluid individuals can identify as female one day and male the next, switching back and forth whimsically.

And what about the flip side?  The position on locker rooms open to all severely fails transmen: female-bodied people who identify as male.  In high school, girls who identify as boys often bind their breasts to make their bodies conform with their gender identity.  This works when clothed, one can be perceived as male.  But in the locker room?  Do schools really expect a teenaged female-bodied person to unbind her breasts and shower with the other boys?  Transmen can still be sexually harassed and raped.  Clearly this access to locker rooms and shower facilities is spearheaded by male-bodied people who want access to female sex-segregated spaces.

Although right wing groups are also opposing this “guidance” from the government, they are doing it on the grounds of religion in addition to the privacy argument outlined above.  The religious argument is that female modesty is required by their Christian, Jewish or Muslim faith. The Women’s Liberation Front’s suit against the reinterpretation of Title IX to include transgender students overlaps in some ways with the right wing suits centering on privacy rights for girls and women, but goes further to make the critical point that sex discrimination is not the same as discrimination against transgender people.  To group transwomen and women together degrades the rights of women.  Transgender people need their own separate protection against discrimination, one that doesn’t impinge on women’s rights.  WoLF needs your help funding this suit!  Please visit https://www.gofundme.com/WoLF-vs-USA