The following is a Facebook post from a Bernie Sanders delegate about her experience at the National Democratic Convention. It captures some of what it was like on the inside and what delegates endured and learned—that the reality of this country is not comfortable. It also captures the determination of many to fight on. This perspective is only available to us because many of the Sanders delegates were average folks instead of intense party loyalists willing to go along with whatever the DNC told them to do.

Bernie Sanders may not realize that he started a runaway train, one that has left him behind even as he tries desperately to catch it. On August 24th he will be giving a speech about his new organization “Our Revolution.” One wonders what kind of “revolution” is possible within the confines of the Democratic Party. We will be watching to see how many of his supporters buy into it. Right now it seems that at least many millennials are going with the Green Party’s Jill Stein and Ajamu Baraka. 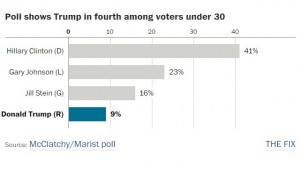 The same article points out that the New York Times “also added a crucial point, one that is a positive sign for third parties looking to gain traction amidst two-party dominance: ’40 percent of those in this age group say they are politically independent.'”

We do not personally know the author of the piece below and though we disagree with her in places—particularly on the idea that we can vote our way out of the political and economic mess we find ourselves in—we appreciate her passion and commitment.

This Facebook piece was sent to us by Pete Healey. 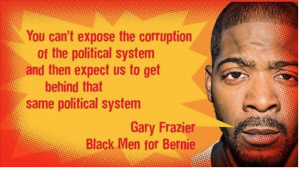 Back from Philly and it has taken me a full week to calm down. I was simply stunned by the experience. I went to the Democratic National Convention with an open heart, a big heart—inspired by the integrity and commitment of Bernie Sanders, filled with passion for the principles of democracy and its promise of social, economic, racial and environmental justice, and eager to learn and connect and participate. I am deeply grateful to have been a Delegate for Bernie and to have witnessed the convention unfiltered, in person, with my own eyes, because it changed me. A veil has been lifted and I left Philly with two things: heartbreak and determination.

My heart didn’t break because my candidate lost—it was clear to me well before the convention that Bernie would not have enough Delegates to become the nominee.

And my heart didn’t break from the hostility, vitriol and disdain directed at me and other Berners by many Delegates and supporters of Hillary Clinton and Democratic Party staff. Sure, it was disappointing and somewhat demoralizing. I had hoped, naively it seems, that with Bernie getting 46% of the vote, we might be genuinely welcomed and invited to converse and work together to find common ground, rather than being offered the we-won-and-you-lost-so-sit-down-and-shut-up variety of “unity” normally reserved for the Republican Party.

Even the proof that the DNC violated its rule of impartiality to favor Hillary over Bernie, making a mockery of the Democratic Party’s core value of “equal opportunity” (and arguably calling into question the validity of the race) is not what broke my heart. Or the growing body of evidence that points to election fraud in several states.

Now it’s no secret that presidential nominating conventions have become big campaign PR opportunities in recent decades. I was expecting some glitz, some hoopla, some spectacle. What I wasn’t expecting was the complete Disneyfication of the event, carefully crafted with a fairy tale narrative and Orwellian-style manipulation of participants and the media to bring the illusion to life. Last week, the American public was robbed of the opportunity to witness the reality of a fractured Democratic Party with deep divisions on issues, purpose, and even basic values. Millions of corporate dollars were flowing into the convention, with elected officials and party insiders respectfully serving the wants and needs of their wealthy constituents, while a couple thousand scrappy, brave, devoted citizens (representing millions of everyday Americans) all came to look for America and found themselves silenced, invisible, ignored. This is what our democracy now looks like, and how can We the People fix it if we aren’t allowed to even see it happening?

For years I have been reading about the corruption and subversion of our political and economic systems by huge corporations and wealthy elites. Concepts like “managed democracy” with sophisticated public relations techniques to direct and sanitize our public discourse, and “inverted totalitarianism” where corporate power rules all branches of government, offered me a glimpse into the dangers we could eventually face as a people if we don’t get money out of politics, reform our electoral process, and start showing up at the polls en masse.

Last week in Philadelphia my heart broke because I witnessed a hard truth: the corporate coup d’état is already happening, right now, in slow motion before our very eyes. Nearly half of our country is living in poverty, the rich are getting richer, and our planet is being destroyed. We are lulled and entertained by consumerism and celebrity and kept in line with fear—fear of Trump, fear of ISIS, fear, fear, fear.

Bernie Sanders’ timing could not have been better. The Political Revolution arrived just in time and I, for one, believe that it’s not too late for us to take back our democracy. I am determined to continue the fight alongside the hundreds of thousands of people who have awakened and organized during Bernie’s campaign. We may not all agree about the Presidential race—some are going to vote for Jill, some for Hillary—but we do agree on two things: (1) the absolute imperative to get people elected at all levels of government who will actively work to get money out of politics and support Bernie’s platform, and (2) making sure that every single American is able to vote and that their vote is actually counted. Accurately. This is not about party, it’s not about ideology, it’s about DEMOCRACY.

I was proud to be at the convention with the many courageous Bernie delegates who protested inside the arena, like the amazing California delegation whose solidarity and bravery gave me the strength to hold up my anti-TPP sign despite intense pressure and intimidation by DNC and Hillary supporters. Also proud of the many delegates who took a stand and walked out of the convention to join the protests outside. And proud to be among the hundreds of delegates who stuck it out and stayed on the convention floor until the bitter end to bear witness to what is really happening and send the message that we are not going away.

Heartbreak and determination. That is now how I Feel the Bern.