Not a day goes by lately when loving parents can’t be heard spouting some hackneyed sex stereotype (“my son likes pink; my daughter prefers trucks to dolls”) as evidence that their child is the opposite sex “inside” as opposed to what sex their genitals suggest. What is ignored and goes unsaid is that the concept of gender identity depends on the idea that human brain function is “sexed”—that is, the existence of “gender identity” depends on large differences between female and male brains. 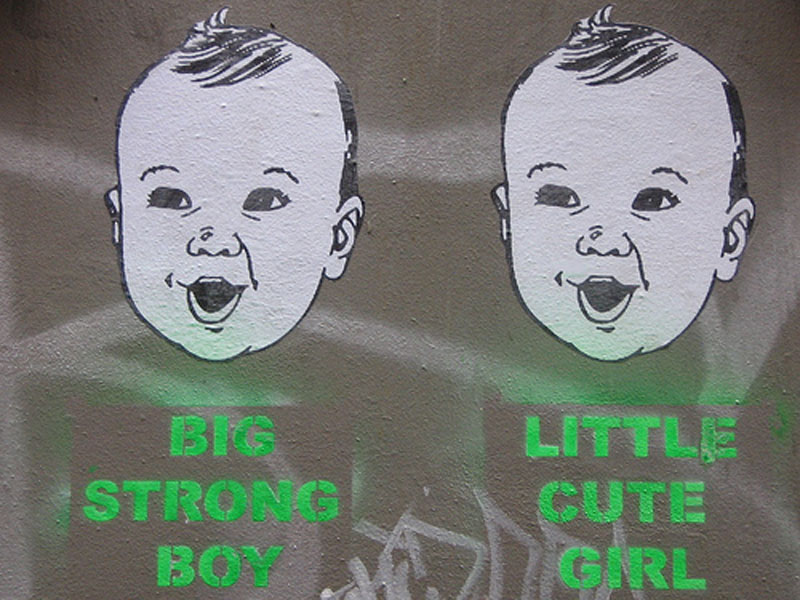 And for hundreds of years feminists have argued that our minds are equal to men’s. There was also a time, not so long ago, when brains were claimed to differ by race, that “black” brains were somehow different than “white” brains. Though this still creeps in occasionally, that racist idea has been relegated to the scientific dustbin.

Why, then, is the notion of male or female brains not immediately condemned as sexist? One of the problems is that male supremacists on both the left and the right continue to invoke it, and some of our leading scientists continue to promote it.

Dr Siddhartha Mukherjee, Assistant Professor of Medicine at Columbia University and a Pulitzer Prize winning author of a book on cancer, has a new book out called The Gene. These impressive credentials didn’t save him, however, from speaking beyond his realm of expertise and promoting male supremacist propaganda about gender “identity” when interviewed by NPR Fresh Air radio show host Terry Gross (May 16, 2016).

Indeed the unreflective, everyday sexism Mukherjee displayed when talking about the science of sex and gender identity took my breath away. When Terry Gross asked him about gender identity, he replied,

So, for the large part, gender anatomy, whether you’re male or female from the sexual anatomy, is determined really by one master gene…[which] unsurprisingly…sits in the Y chromosome.

That teaches us something very important, that means that as far as gender anatomy is concerned, as far as even gender identity is concerned, there is one master regulator… but it ALSO tells us, and this is where things get most interesting…that that master regulator begins to recruit downstream things, it doesn’t act on its own…. Its sort of like the commander in the army but the commander in the army still has to have recruited its deployment of all the other troops, all the other, you know, the hierarchy, as it were, and there are infinite variations along that hierarchy. So you can still have…the master regulator commanding male gender anatomy and a different hierarchal organization flowing down from it…which would lead to slight different variations, or radically different variations, in gender identity.

This was a “stand up and yell at the radio” moment for me. Dr. Mukherjee’s description of sexual development is such a huge overstatement that it is actually scientifically false. I know it is terribly tempting to speak outside one’s area of expertise in such situations but typically scientists are more reticent. Not this scientist! He is so filled with male entitlement and the excitement of a recently discovered gene normally present only in men that he cannot contain himself.

Here’s the real scoop: There are many, many genes that are required for sexual development.  Using Mukherjee’s phrase, there are several “commanders” in the sex development army.  Sex is so important to the evolutionary persistence of the human species that there are redundancies built into the system—many pathways to get to the same end point: the development of an individual with the potential to reproduce. If one pathway is blocked, another is called to play a primary role. These various routes to get to the same outcome make a full understanding of the reproductive system very, very difficult, as I found out during a decade of research on the processes that lead to ovulation in adult female vertebrates.

Contrary to Mukerjee’s implication that female humans develop because some factor is missing, it is more accurate to say that human development will lead preferentially to the female sex unless the new gene recently discovered is active in the embryo. Male scientists spent years and years searching for the “testis determining gene” which was surmised to be located on the Y chromosome since it virtually always accompanies the X chromosome in male humans whereas female human beings have two X chromosomes. That gene on the Y chromosome, given the name SRY, is another commander in the army of sex development, and causes the undifferentiated gonad to become a testis rather than follow the developmental path that had already been at work, and would have lead to the formation of an ovary.  It must be tough for men to admit that male humans are the auxiliary pathway rather than the main pathway of sexual development.

Murkherjee goes even farther afield in answering Terry Gross’s question about gender identity. Here he leaves the domain of science completely. Without hesitation he supports the controversial notion that there is such a thing as innate “gender identity.” He offers no disclaimers about the science not being settled, nor does he question the very concept that there might be female or male brains. Contrary to popular belief, there is good evidence that behavioral and intellectual traits overlap greatly for women and men: we are more alike than we are different.  This evidence has been compiled and critically examined in several recent books (see recommended readings below).

Murkherjee asserts, with no evidence to back up his statement,

Without saying so directly, Mukherjee implies that the SRY gene is turned on in the brain and is acting as a “commander” in the army of sexual development on this level too. He is suggesting that SRY “sexes” the brain. I have verified that SRY is active in the brain but there is no evidence it leads to different brain development in male humans. SRY is similar in structure to many “master regulators” expressed by both females and males and could have many, many roles. SRY could be redundant in the male brain, there is no evidence to the contrary.

Purveyors of “brain sex” also often point to the effect of sex hormones on brain function.  The development of brain and gonads are well underway by the end of the embryonic period at 8 weeks of gestation. Genitals develop later and depend on the influence of hormones secreted by the fetal ovary or testis. These hormones also affect brain development (specifically for reproductive function) so, even if one believes that these hormones “sex the brain” in some other sort of meaningful way, it is highly doubtful that the brain and genitals can be mismatched.  The same hormone that influences the development of the genitals, acts in the brain.

Perhaps Dr, Mukherjee should take some of his own advice, because earlier in the interview he says, “it’s very important to be clear about these ideas, because otherwise we fall into language that’s…all incorrect and wrong, and then you just foster nonsensical controversies.” Seems to me that Dr. Mukherjee has fed an ongoing controversy without providing much new and useful information!

← Left Behind
Backdraft from the U.S. Military Budget →