While, of course, all people deserve basic respect for their humanity, I am getting tired of the demands of trans activists that serve to erase the existence of women and I’m tired of the liberal response to these demands, which so often turns a deaf ear to the needs of, and even the existence of, half of humanity. Within the trans solidarity crowd there is tremendous resistance to grappling with some of the serious political issues regarding biological women and transgendered people. Two egregious cases have come to our attention recently:

“The Women’s Alliance: Confronting Sexism on the Left”

So reads the banner on the web page of the Women’s Alliance of Veterans for Peace, followed by an introduction entitled “Veterans for Peace Carries On 50 Years of Male Supremacy in the U.S. Antiwar Movement“

Three feminist activists (and unnamed supporters) are waging a struggle with Veterans for Peace (VFP) over its embrace of a position on “trans-misogyny and lack of a position on misogyny itself. This, while female members of VFP are struggling against sexism within the organization, and have been for years.  Regrettably, sexism in the peace movement isn’t new.  Indeed, the Women’s Alliance recounts an incident in 1969 in which feminist and anti-war leader Marilyn Webb was met with cat calls and sexist harangues like “Take her off the stage and fuck her” when she tried to give a speech at a major anti-war demonstration.

The Women’s Alliance recounts in the “Introduction” how they came to take action:

Because we are recognized as women who speak openly about gender politics despite receiving violent threats for doing so, we began receiving messages from female VFP members and allies, including female veterans, expressing grave concerns about the implications of VFP’s position statement and how quickly it was formulated and publicized.

What emerged from these discussions was that not only were women’s boundaries at risk by VFP’s position, but that women’s voices would be silenced by it. Additionally, more stories surfaced of 30 years of women being marginalized in this male-dominated organization. Stories of sexual harassment by male leaders against women, physical assaults by male members against women and, of course, sexist objectification.

That Veterans for Peace and its all-male executive board and executive director had, in a matter of two weeks, taken a position that will directly affect women outraged even those who had not up until that point explored the issue of gender politics.

Briefly, a timeline of the issue goes like this:

The Women’s Alliance says, “…given that Veterans for Peace made a position statement regarding transphobia and transmisogyny, we also requested copies of past position statements regarding sexism and misogyny. We have yet to receive any confirmation that they even exist.”   Note that the VFP concern seems centered on men who have transitioned to become transwomen. There is no provision for the fight against trans-misandry—something that is undoubtedly important to those female members who have transitioned and live as transmen. We find this telling as to the nature of these demands.

The Women’s Alliance activists were called transphobic bigots and received the usual threats of rape and violence for disagreeing with the theory of gender being promoted by trans activists and now the VFP. Perhaps the most over-the-top attack was directed at Cindy Sheehan, who became a leader in the peace movement after her 24-year-old son was killed while serving as an Army Specialist in Iraq. When she posted a comment in support of the Women’s Alliance Statement, she was told by the trans solidarity crowd on social media that all the antiwar work that she has done has become “irrelevant,” and all her work on behalf of Private Manning is now “negated.”

You can read the full story here and listen to the Cindy Sheehan interview with the female VFP members looking for support here.

You can add your support to the Women’s Alliance statement by entering a comment at the bottom of their page: http://thewomensalliance.blogspot.com/p/veterans-for-peace-carries-on-50-years.html

The Women’s Alliance says you need not be a member of VFP to ally with them and sign the letter.

Under pressure from the transgenderists, the Midwives Alliance of North America (MANA) is seriously considering changing its language from female to gender-neutral so women will no longer be said to give birth, but instead will be referred to as “the birthing parent.” Pregnant “individuals” will replace pregnant women. Women have been almost totally erased in revisions of MANA’s newly proposed Core Competencies. These proposed changes may not pose the immediate danger of being forced to share a locker room with a potential rapist, but they are outrageous nonetheless, erasing the fact that 50% of humanity, women(!), perform crucial reproductive labor. MANA’s proposal denigrates all women in an effort to acknowledge and support a miniscule number of “birthing parents” who identify as transmen.

MaryLou Singleton and Michelle Buenaventura Smith are two feminist midwives trying to do something to stop this. They have written an Open Letter to MANA and are looking for women to sign it.

Their statement reads, in part:

Adopting this language change in the context of midwifery and human reproduction is based on either or both of the following assumptions. 1) That MANA and the midwives MANA represents believe that it is biologically possible to change one’s sex. Or 2) That we deny the material basis of biological sex and acknowledge gender identity as primary.  We know as midwives that biological sex occurs at the level of our DNA and the gametes we produce, and is immutable.  By embracing the idea that any human other than those in a class called women carry offspring to term, give birth to them and nurse them, we are prioritizing gender identity over biological reality.

We believe that it is a mistake to define the experiences of pregnancy and childbirth though the lens of gender identity. The very few gender-identified males that have given birth or accessed an abortion have only done so because they are female-bodied people, and that scientific fact cannot be erased. We are allowing gender identity to be the primary way that we refer to one another, even for a biological process like birth.

The root of female oppression is derived from biology. Patriarchal systems arise out of male attempts to control female sexuality and reproduction. Female liberation from patriarchal oppression, including brutal and demeaning birth practices, cannot be achieved if we are forbidden from mentioning female biology.  Women have a right to bodily autonomy and to speak about their bodies and lives without the demand that we couch this self-expression in language which suits the agenda of others who were not born female. Gender, sex and sexuality should not be conflated. Sex and sexuality are based upon biology whereas gender is a socially constructed concept.  We do not give birth with our gender identity but with our biology.  The document refers to the midwife’s need to be knowledgeable about the “anatomy and physiology of the birthing parent,” as if the anatomy and physiology of birth were not distinctively female.

To sign the Open Letter and keep women recognized as those who give birth, send an email to womancenteredmidwifery@gmail.com.  You are asked to give some sort of credential after your name: mother, woman, biology teacher, midwife, etc. 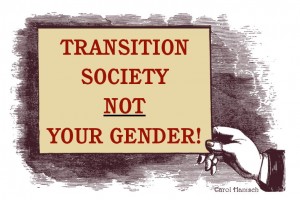