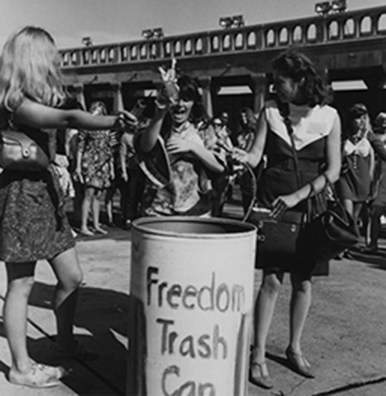 What do YOU want to toss into the 2018 Freedom Trash Can?

On September 7, 1968, more than 100 women descended on Atlantic City in New Jersey to protest the Miss America Pageant, that American ideal of femininity to which women were pressured to admire and aspire. The protest was welcomed by many, called absurd and trivial by others, and was rather shocking to most. In 1968 women just didn’t make noisy public demands about their lot in life.

More importantly the protest announced that a new national movement calling itself “women’s liberation” was afoot in the land with the aim of taking feminism beyond the legalistic into every aspect of women’s lives. In the newly forming consciousness-raising groups, it was becoming clear that nothing would be off limits to women’s scrutiny and demands.

One of the myths that has sprung up around the Protest is that more than 400 women from all over the country were on the picket line. If only! Written reports of the time claimed between 100 and 150 participants, mostly from New York and a few other places with Women’s Liberation groups.

It is important to know the protest originated in a very small, but committed group of probably no more than 25 women where consciousness-raising held sway at weekly meetings. Through consciousness-raising – examining our own lives and speaking from our own experience – we were able to tap into a wide swath of what was oppressing women in our daily lives.

Every woman, even those deemed attractive by societal expectations, are negatively affected by beauty standards. This has been doubly true for Black women who were not considered attractive by mainstream U.S.A. As of 1968, there had never been a Black Miss America contestant. A feeling that one never looks “right” causes women to spend considerable time and money trying to correct their appearance. As Ros Baxandall would sum it up later on the David Susskind Show, “Every day in a woman’s life is walking Miss America Pageant.” Thus armed with common concerns of women, we were able to kick the door open a crack to women’s liberation.

It is also important to know that we were not celebrities, not glamorous, not connected with academia, and not women in power jobs. We were a pretty ordinary bunch except that a number of us had at least some experience in protesting and organizing in the Civil Rights, Free Speech, Labor, and Anti-Vietnam War Movements. The only other thing special about us was that we were committed to understanding, and then telling, the truth about male supremacy as we saw and experienced it  – and to agitating for our total liberation.

Considering that we were protesting a national beauty contest, it would be easy to assume that we were only opposing male-defined beauty standards. It was actually broader than that. Among the “items of female torture” (high heels, girdles, hair curlers, bras, pantyhose, etc.) we threw into the Freedom Trash Can, we also tossed mops, floor wax, dishwashing liquid, and Good Housekeeping, and Playboy Magazine. Men sharing the housework and free 24-hour childcare centers were high on our list of demands. Beyond protesting beauty contests, we were consciously out to build a movement to liberate all women, not just “empower” individual women to succeed in a competitive system that pitted people – and women – against each other.

Much of the ground won by women’s liberationists of the ’60s and ’70s has suffered a serious setback. Even the control of women’s appearance, which had weakened for a while under a strong push from the WLM, has reasserted itself and in some ways gotten worse. Where the issue then was whether a woman must shave her legs, now it is whether she must also shave her genital area! The three-inch heels we joyously threw into the Freedom Trash Can have morphed into even higher ones. How this happened is another discussion, but it’s most likely related to the abundance of pornography now available on the internet that has influenced current “fashion” as well as a backlash.

To commemorate the 50th anniversary of the Miss America Protest, we invite you to think about what you would most like to throw into a women’s liberation Freedom Trash Can in 2018. 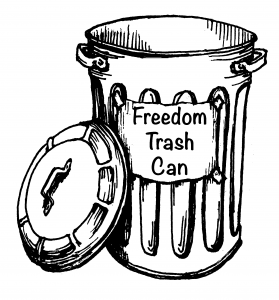 Let’s make an online commemoration that we can all attend–and learn from!

Below are a few links for those wanting to learn more about the 1968 Protest:.

A Redstockings Archives report with photos:

“A Critique of the Miss America Protest” (1968) by Carol Hanisch:

Two articles on this site regarding Miss America and the WLM: