A recent article by Rebecca Grant on Mic.com is a timely reminder of the work that feminists have done to literally take abortions into our own hands. She explains the procedure called menstrual extraction that was developed and popularized in the 1970s by feminists.  Cofounders of the first Feminist Women’s Health Center, Carol Downer and Lorraine Rothman, took the idea on the road and many women’s self-help groups learned how to do the procedure.  According to Downer self-help movement groups did more than one thousand procedures safely. It may be time young women knew about this movement and began to set up their own groups.

Sometimes there is a collision between women’s health and the professional and economic interests of the medical establishment. Rebecca Grant quotes Dr. Brian Levine, the Practice Director for the fertility clinic Center for Reproductive Medicine in New York,

“This is a serious medical procedure with serious ramifications if not done correctly,” Levine said. “Any time you are instrumenting anything into the uterus, you put yourself at risk of perforation, of bleeding and hemorrhage, of infection, of sterility. It is not something to experiment with. I think the women who say it’s safe to do at home are overstating their capabilities.”

Of course that is true, but the fact is that women have done this successfully for years. There’s even a book titled “How to Stay Out of the Gynecologist’s Office” available on the website womenshealthinwomenshands.org .

Perhaps when one’s paycheck depends on doing these procedures, it taints one’s perspective and makes the risks appear more difficult than they really are.  And it isn’t just male medical professionals, many female abortion clinic owners would also argue against women taking their health in their own hands. It must be hard for medical professionals to admit that their skills aren’t that hard to learn.

Indeed, the underground abortion group in Chicago that went by the name Jane “provided more than 11,000 women with safe and affordable abortions, abortion counseling and health education” [The Story of Jane by Laura Kaplan] between 1969 and 1973  when the Supreme Court decision known as Roe v. Wade was finally handed down. Everyday women learned this skill and practiced it quite successfully. The procedure the women of Jane performed was similar but not exactly the same as menstrual extraction.

Jane even attracted some unexpected allies:

“As time went on, Claire became aware that there was a group of policeman who were sending their wives, daughters and girlfriends.  So many police officers’ families were calling her that Claire had a certain sense of security even though she knew what she was doing was illegal.” (The Story of Jane, p 12)

The Supreme Court decision of 1973 said women “and their doctors” could elect to end an early pregnancy and did nothing to guarantee access to this very common and still needed procedure. The need for self-help arises with problems of access to services for women and problems in even affording medical care in our big-business dominated health system. [see our August 2014 article “Boiling the Frog Slowly”].  In 2016, Roe has been all but destroyed, laden as it is with restrictions.

Another self help approach is “abortion by pill” as depicted in the film “Vessel.” This approach too has its legal limitations and additionally, it depends on Big Pharma.  Women who have experienced both types of abortion tell me that the surgical kind is faster and less painful.  But surgical abortion these days often means walking the gauntlet between screaming anti-abortionists waving disgusting pictures of dead near-term fetuses. The harassment is one reason some women see an advantage to being able to get the abortion pills from their regular doctor.  Of course that approach depends on the willingness of your regular doctor to prescribe them and will only work so long as the “powers that be” don’t make these pills even more inaccessible than they are now. 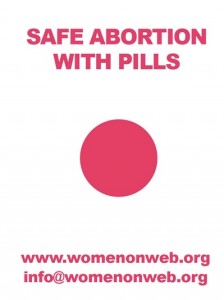 None of these self-help approaches solves the problem of abortion not being legal and accessible to all women, and work on those fronts needs to be stepped up, not abandoned.  We’ve endured horrible harassment for more than 40 years and several doctors have been killed.  But there’s no shortcut to making abortion safe, legal and accessible. These underground measures are exciting and can be of great benefit to individual women, but its hard to imagine them being used on the mass scale that is required.

← An Historical Reminder: “Separate to Integrate”
When Women Strike… →