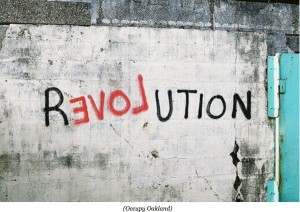 The following email correspondence began informally with a forwarded link to an article entitled “Alexandra Kollontai and Red Love” by Teresa L. Ebert available at http://www.solidarity-us.org/site/node/1724.

Ebert’s article began, “WHAT IS ‘RED Love’—and more specifically, what is a socialist, or more complexly, a communist theory of love and sexuality?”

Good question!!! We don’t know Teresa Ebert, but we appreciate her article’s stimulation of this discussion. Readers of the blog are invited to join in after reading the original article and the material below. Be forewarned that although passion is allowed, this is a moderated discussion, and only respectful, on-the-topic comments which do not include personal attacks will be posted.

This brought to mind the “Women Rap about Sex” article in New York Radical Women’s 1968 publication NOTES FROM THE FIRST YEAR.  We have included it in the blog’s history section.

I certainly agree about how the economic and the ideological dovetail. There are some questions I believe we simply can’t answer until we manage to change our material, external circumstances in MAJOR ways.

I also agree with Kollontai about the problem of people believing they can own other people. This is my major objection to monogamy:  basically, that it is about one person possessing another. Can’t be done.  Nor, I believe, is it desirable. This is not to say that in the throes of sexual desire I have not wanted exclusivity.  But that period of intensity is fairly short-lived.

I don’t think possession has to be part of the deal. How about voluntary monogamy for “as long as we both shall love”?

I like the description of communist morality and proletarian morality, but I don’t see the complementary discussion of not owning the children and some discussion of collectively raising them. This is a BIG problem with the piece in my mind. You can’t talk about heterosexual sex and forget about the children!!  Do you think that is Kollantai’s problem or the blogger ignoring that part of Kollantai’s work? The interesting critique of Butler makes me want to see more about the differences between “Red Love” and postmodern neoliberal love and right wing conservative love. I like her phrase Red Love.

You say, you can’t talk about heterosexual sex and forget about the children!!!

Why not? It seems to me that children enter into feminist discussion for pragmatic reasons:  women are saddled with this social responsibility. If women are to be liberated, this burden must be shifted. Some variation of collective responsibility is the only solution I’ve ever heard discussed.  (I’ve known many feminists who resent even the idea that childcare is somehow a special FEMINIST responsibility.)

Also, it’s important to recognize that a number of lesbian (and  males?) couples insist on having children and go to great lengths to have them. They want a “family.” I also know of at least a couple of cases where the couple split up and there was a HORRENDOUS custody fight. Very nasty. One side centered around the rights of the woman who had carried the child in her womb for 9 months. The other woman had stayed home for many years with the sole responsibility of caring for this child. The “natural” mother refused to share parental rights because she wanted to be shed altogether of the other woman. Don’t know how this case turned out, but it was a mess. The “natural” mother was a strong feminist.

In fact, the Russian revolutionary position was completely communal. But I don’t know if Kollontai worked on this aspect. She should be allowed to stand on her own. She was trying to dismantle a traditional view of women’s role which had imprisoned women since time immemorial. Do we want to say that women should be liberated ONLY IF the childcare issue is resolved?

You ask, “Do we want to say that women should be liberated ONLY IF the childcare issue is resolved?”

Of course not. But the point is children are often the result of heterosexual sex (and as you say, all manner of people want a family) and it just seems pie in the sky to talk about Red Love without mentioning the fact that there will be children. And theorizing how they fit into Red Love is important. By standing aloof, by not directly acknowledging inequities, we validate the existing power structures and unequal status quo. It’s not that childcare is the responsibility of feminists (I agree) but if we’re going to talk about love we’d better include some demands about it.

I used birth control. I don’t see that having heterosexual sex necessarily results in children. Before birth control and abortion, children were more inevitable. So, I don’t understand your statement “there will be children.”

I should also say that I think we need to be careful about “reverse” ageism?  I have liked particular very young people very much. And when I was younger, I also liked/loved some old people very much. But not either BECAUSE they were young or old people. I’ve known people who fell into both groups whom I REALLY disliked also.

I think that all children now in the world are all of our responsibility, but up to a point. I believe we are all responsible for financially contributing to their care and education. But more on a communal basis. On the other hand, isn’t there a moral problem with saying that while we are all responsible for new beings in our communities that we do not, however, have any rights in terms of how many new beings come into our communities and whom we are then responsible for? I realize this is an unpleasant question but it seems necessary.

Why should I be responsible for your decisions and choices? Doesn’t make sense on its face.

Frankly, I don’t really worry about this overly much because every state that has had wide open abortion has then later had to restrict access to abortion since the state couldn’t maintain even zero population growth. The more freedom women have, the less inclined they are to go this route.

OK, between good birth control and free access to abortion we can prevent unwanted children. I certainly believe that is true. But isn’t that part of a consideration of Red Love? Don’t we need to SAY it directly?

This is an interesting point. Yes, we should have some rights, shouldn’t we? We’d want to be sustainable. From what you say below it might be more of a problem that we have enough little ones to carry it on.

I’d also like to discuss more this idea of monogamy. I got the impression that Red Love wasn’t monogamous as described in that piece but at the same time one wants to avoid the pitfalls of the left when women were expected to put out for anyone.  WOMAN 2 seems more attached to monogamy than either WOMAN 1 or me. I understand monogamy gives women some protection in this class society, and would continue to protect against sexually transmitted diseases under any conditions.  But WOMAN 2, do you see the healthy communist sexuality as being a monogamous one, or a serially monogamous one. (voluntary monogamy so long as we both shall love)?

I’m pro-monogamy as a goal to strive for, but I guess I’d better explain what I don’t mean by that. I don’t mean that you have to commit for life to the first person who grabs your attention or who you have sex with. I don’t mean “enforced” monogamy. I know that times change, needs change, people change and so do relationships and I certainly don’t want to be “trapped” with someone I don’t even like.

On the other hand, there are many good things about long-term relationships, whether friendships or with a mate that are more important than fleeting urges. I WANT sex to be more than “a drink of water.” The anarchistic “hummingbird” approach (grab a little nectar here and a little there) doesn’t appeal to me. I want my mate to be exclusive and responsible and I will be the same–a serious secular “marriage contract” of sorts. If it just doesn’t work anymore, before you move on or even look for someone else, you have to work out the difficulties of leaving the relationship with your partner, you don’t take your commitment lightly, you don’t just walk out and take up with someone else who strikes your fancy or steal a little nectar behind your partner’s back. Maybe without any of the insecurities and competitions so prevalent under male supremacy and capitalism, this would no longer seem necessary. I can’t see that far ahead.

I like this idea. Alas, I never thought of it myself. I’m referring to your idea of “working out the difficulties of leaving the relationship.”

I’m also aware that what I am saying and how I have felt in the past are quite different. I remember I was involved with a journalist in D.C. while I was in NYC. (I’ve always liked long-distance romantic relationships!)  Anyway, when I met him, he was in the process of a divorce.  He had a couple of kids.  We were having a REALLY hot affair. Then, at some point, he told me that he and his wife were getting back together because of the kids.  But he didn’t see why WE couldn’t continue. Oh, my. I cried and cried. But I couldn’t do that. Didn’t matter how I felt for him, I just couldn’t accept this. Why? I don’t really know. Not really, really.

So, I too believe we just can’t see that far ahead. We are doing our best and groping our ways forward.

It bothers me that when sex is part of a relationship, it crosses over into the irrational.  Which is not to say that I truly understand why we are drawn to certain people even in friendship. That seems to have more to do with character fit. Shared values of some kind. But that irrational element is not so prominent. It also bothers me that sexual attraction is not so permanent. We change. They change. Whatever. It is rare that you “fall” for someone after you’ve been friends for a long time already. So, in part, is it the strangeness or mystery that attracts?

Nearly all of my relationships have been with men who I was attracted to for some good reasons. Alas, sometimes it turned out I was wrong about them but it started out hopeful. I rarely indulged in one night stands, though. The desire for an orgasm or intimacy was never enough for me to trust them with my body or my feelings. I have ended up being lovers with men I started out with as friends and I have ended up friends with men after we were lovers. And I have been good friends with men with whom I was never a lover. In some cases, there may have been a spark or two that flew but was never acted on.

I engaged in a lot of one-nighters (well a dozen or so) until I became convinced it really wasn’t in my interest. One nighters didn’t ever seem to be about satisfying me–I came to the conclusion that it took longer for a man to understand how to please a woman. Right around this time I read the Hite Report and discovered that 87% of women couldn’t achieve orgasm without the use of hands. It dovetailed well with my newfound conclusions, and I quit doing one-nighters.

[At this point it was decided to move this discussion to the blog and invite others to participate.]

“How to Defang a Movement: Replacing the Political with the Personal” →