On the heels of our Mother’s Day post on “Birth Regret: A Mother’s Day Truthtelling”  comes a chilling report that not only do more women in the United States die of complications from childbirth than in any other developed country, but the rate is going up at a shocking rate. Moreover, it states that 60 percent of the deaths are preventable. 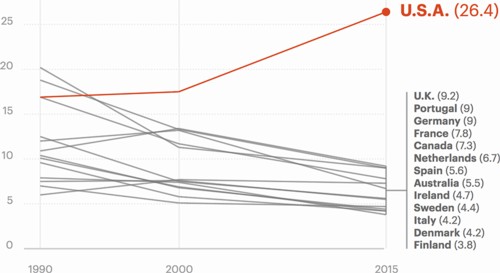 “Global, regional, and national levels of maternal mortality, 1990–2015: a systematic analysis for the Global Burden of Disease Study 2015,” The Lancet. Only data for 1990, 2000 and 2015 was made available in the journal. Source: The Lancet Credit: Rob Weychert/ProPublica

National Public Radio teamed up with ProPublica for an extensive investigation to find out why. Here are their “key findings”:

♦  More American women are dying of pregnancy-related complications than any other developed country. Only in the U.S. has the rate of women who die been rising.

♦  There’s a hodgepodge of hospital protocols for dealing with potentially fatal complications, allowing for treatable complications to become lethal.

♦  Hospitals — including those with intensive care units for newborns — can be woefully unprepared for a maternal emergency.

♦  Federal and state funding show only 6 percent of block grants for “maternal and child health” actually go to the health of mothers.

♦  In the U.S, some doctors entering the growing specialty of maternal-fetal medicine were able to complete that training without ever spending time in a labor-delivery unit.

Similar to not wanting the public to be privy to how many people of color are shot by the cops, maternal deaths are not regularly reported. As ProPublica noted:

Lack of data was among the main challenges. By almost every measure, basic tracking of maternal deaths and near-deaths is inadequate. Numbers are vague and ambiguous.

This left us looking to unconventional sources for names, causes of death and places where women are dying. We found particular success on the crowdfunding site GoFundMe.

Families and loved ones were sharing devastating details on pages set up to help cover the unexpected costs of losing a mother. This was particularly striking because people so rarely talk about maternal deaths elsewhere. Even the most popular mommy blogs don’t often delve into mortality and near-deaths. We realized that it’s part of a pattern.

The NPR report concluded that:

In the U.S., unlike some other developed countries, maternal deaths are treated as a private tragedy rather than as a public health catastrophe. A death in childbirth may be mourned on Facebook or memorialized on GoFundMe, but it is rarely reported in the news. Most obituaries…don’t mention how a mother died.

When I mentioned this report in a group of women, I was met with either disbelief or with the assumption that this happened only to poor, black or immigrant women who don’t have healthcare. Not so. It can happen to any pregnant woman, often with what passes in the U.S. as good health care. As NPR reported, “While maternal mortality is significantly more common among African-Americans, low-income women and in rural areas, pregnancy and childbirth complications kill women of every race and ethnicity, education and income level, in every part of the U.S.”

ProPublica is doing further research in an effort to reach more women of color. “African Americans are three to four times more likely to die from childbirth complications than whites, yet we have only heard about 120 stories relating to black mothers. We are now researching an upcoming article about racial disparities,” they wrote.

Two things are obvious: Maternal death doesn’t happen to men, so it has second-class status among health needs, and the healthcare system in the U.S. stinks—for everyone.