As feminists who have been critical of the concept of “gender identity” for many years, we have been exasperated and concerned that groups and individuals on the Left, who claim to be materialists, have embraced this ideology with little or no analysis of its merits. Thus, we were encouraged to come across Freer Lives, a thoughtful and clearly-written blog from Australia “set up…out of deep concern that the Left has failed to defend the politics of women’s liberation in the context of the transgender trend.”

a hetero male who believes that women are oppressed by capitalism, not by men. Capitalism cannot let go of women’s second class status because it relies on women to perform unpaid labour in the home.

While we disagree that capitalism alone oppresses women (men are beneficiaries of – and often willing participants in – women’s oppression, including women’s unpaid labor) his position on “gender identity” is admirable. In both his own posts and in those authored by others plus many links, he actually contributes to the developing theory behind the feminist opposition to the anti-materialist, post-modernist trans phenomenon, going beyond merely supporting the right to “free speech.” As the blog introduction states,

Because of this, discussions around transgender identity are not simply about defending a minority’s rights. The issue impacts directly on the whole population, particularly women.”

Below are some highlights from Freer Lives that bring much needed and rare light to the debate, particularly in terms of class analysis. We highly recommend you read it – and encourage any Left groups or individuals you know to do the same.

In a post entitled “Left Wing Support for Gender Ideology” the blogger makes a case for badly-needed scrutiny of gender identity by the Left:

Gender identity is usually described in mystical terms, as some kind of personal communion with a mysterious inner truth about oneself. Marxists and left-liberals embarrassed by this magical thinking have strained to provide a material foundation for this inner self, and/or proposed that a scientific understanding of gender identity is “in its infancy” but will surely come in time.

But ideas do not need a scientific grounding to achieve popularity, if there are powerful forces behind them. As an ideological tool gender identity has harnessed support from both left and right, and this in turn has shielded its nebulous core very effectively from challenge. …

The use of the concept of “identity” turns political criticism of an ideology into a damaging personal judgment. As Jane Clare Jones says, it means “collapsing the present ideology of the trans rights movement into the existence of trans people… presenting all critique of its ideology as an act of hatred directed at trans people”.

This ferocious support shields the sexism of the trans trend from criticism, or even scrutiny, on the left. Yet such scrutiny is badly needed. I argued above that the transgender phenomenon faces two ways, and talked about its left-wing side. But of course it has a right wing side too, because it challenges only the most traditionalist, biology-is-destiny form of sex stereotyping. In fact, gender ideologists agree with social conservatives that females are pink and males are blue, they simply relocate the basis of this division from biology to a mystical inner essence. Now any ideology based on sex stereotypes will, without fail, generate misogyny, and so it is with gender ideologists. The woman-hatred comes out in many ways, e.g. the description of women as non-men, the vagina as a front hole, the glorification of girlyness, and, in response to challenge, the calls to punch, rape or kill “terfs” and the actual use of violence against women’s liberationists.

The blogger points out the self-interest of capitalists in the supremacy of gender over feminism:

Gender ideology has proved seductive to the bosses. They have a deep interest in maintaining women’s oppression and have used the corporate media to mainstream this new cool sexism by pouring forth “born into the wrong body” stories: editors and tame journalists read the signals from their lords and masters and jump on board. This includes luminaries on the liberal left writing for The Guardian, The Independent, The Huffington Post, etc who are read and respected by progressive activists, including those in the labour movement.

In a link provided in another article on the blog, “Class Identity Politics and Transgender Ideology”, Deirdre O’Neill makes the class analysis even sharper:

It is not the women who toil in the sweatshops of “developing” countries that the transgender activists wish to “transition” to, rather it is the objectified successful bourgeois women that they aim to be. …

Transgender activism has presented the privileged with an opportunity to ignore questions of class inequality while at the same time allowing some the opportunity to perform a superficial radicalism and progressiveness. As a result we have recently witnessed the spectacle of working class women in prison being assaulted by a man with a penis being ignored and in some cases his behavior excused so that the man’s status as a trans woman can be defended. [emphasis ours–eds.]

In the process there has been a normalizing of the unequal treatment of working class women and an entrenchment of their marginalisation. There is no starker example of the absolute disdain in which middle class social justice warriors hold the working class. Rather than discuss the injustice of imprisoning some of the most damaged and vulnerable people in our society whose ‘crimes’ are mostly related to their poverty we have the ‘left’ clamouring for the right of men to be housed along side them in prison. As for the consequences — working class women are just collateral damage. The callous indifference to the needs of, in this case, working class women is exactly in line with the neo liberal strategy of demonizing and ignoring the unemployed, the disabled, food bank users, those on zero hour contracts, etc.

She continues in her critique of the middle class Left (we think “professional class” may be more accurate):

The middle class-dominated left has abandoned its obligation to critically engage, to clarify and to lead on the political issues of the day. Instead it has simply accepted the terms of the debate put forward by the trans militants (including their really basic conflation of sex and gender). This failure is rooted in the left’s acceptance of identity politics with its assumption that how a group (or the primary definers within a group) articulates its oppression is the last word in the matter.

Yet it is clear that one group’s identity and its claims may easily clash with the claims and identity of another group. Identity politics has no way of negotiating these conflicting claims. In the end the group that can mobilise the most power is the group that will have its claims prevail. In its catastrophic alignment with what is clearly a men’s rights movement, the left has chosen to side with the powerful over the less powerful, men over women, and the middle class over working class women and it is they in particular who will bear the brunt of trans rights as currently formulated.

O’Neill goes on to make an even clearer connection to sexism:

There is something hopelessly naïve if we think we can cast off deep socialization processes by a simple declaration such as “I’m a woman” by a man. There is something suspiciously familiar, the definite whiff of misogyny, in the determination to deny the violence that men perpetuate against men, and against women and the safeguards that women therefore need against men (who after all is doing the ‘upskirting’?).

In a properly functioning democracy the concerns of everyone would be included in an open and transparent discussion. Instead, critical thinking is relabeled “transphobia”, even basic facts are now apparently a sign of Trump-leaning tendencies (thereby ensuring that the Right will own this issue, because the left cannot sensibly discuss it [emphasis ours]). Rather than fighting for us all to transition to a fairer more equal society, the social justice warriors focus on the right of men to adopt the stereotypes that most women have long ago rejected. Rather than fight to create something new, trans ideology recycles old tropes of femininity (“lady brains” – really?) and claims them as progressive. 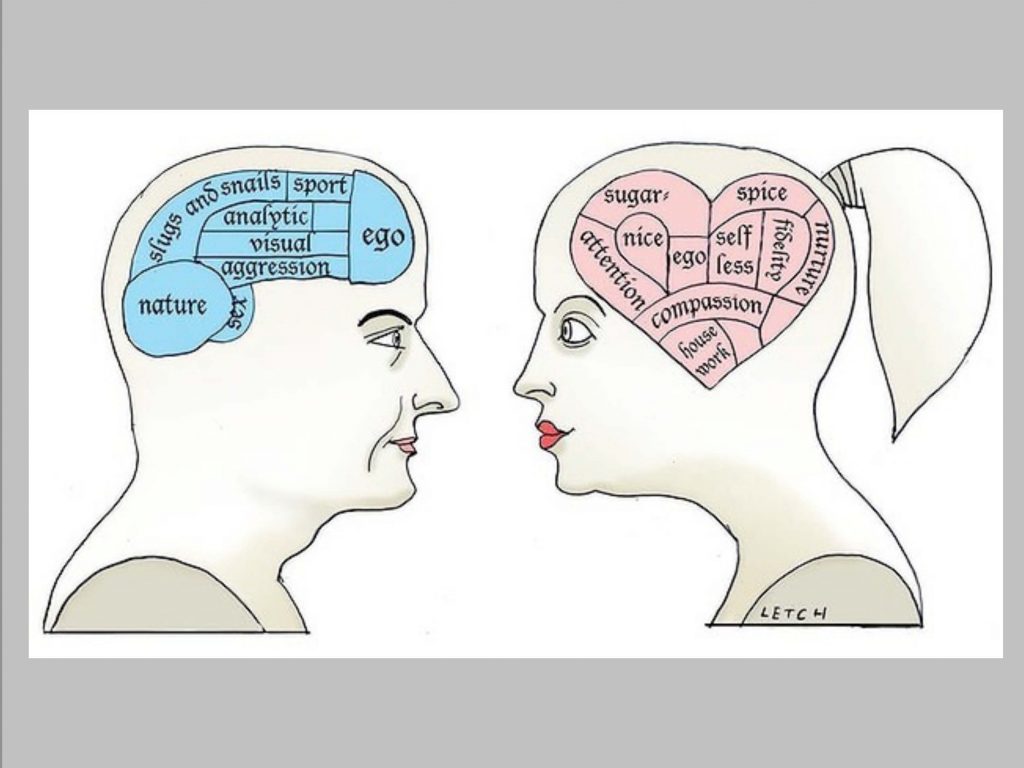 Some practical results of self-ID laws that allow the male-bodied to pass for women in the workplace are recounted In a 9.5 minute video of Lucy Masoud, a London firefighter and activist. She recalls that it took a “bitter and contentious” but successful struggle for female firefighters to win separate changing rooms and dormitories in fire stations in London. Under the new Self-Identity law, male-bodied individuals are allowed in those spaces.

Of the six million [members of trade unions] over three million are women. Yet the silence from unions around this country regarding the issue of self-ID have been staggeringly deafening. Our unions are meant to represent us, protect us and listen to us, but instead they’ve completely ignored our concerns and allowed women members en masse to be abused, intimidated, and in some cases removed from positions simply for voicing our concerns over self-ID. …

Two weeks ago a resolution was moved that the TUC supported the right for a male-bodied male who self-IDed as a woman to be given access to female-only spaces. Only three unions abstained. Every other union voted in favor of that resolution. So where was the consultation with female members? The simple answer is there was none. …

Next, let’s call out the so-called Left-wing media whose role in this self-ID debate has been nothing short of farcical. Personally I find it extremely sad that women like myself have to turn to the Right-wing media in order to hear our voices heard. …

Mousad goes on to call out the “woke left” and the Labor Party and concludes:

If anything good has come from this toxic debate, it has been to see how women from across the country have come out ready to fight. How we’ve come together and organized ourselves – even with the might of the establishment and “woke” left against us, we’ve come out fighting. We’ve been trolled, we’ve been dox’d, we’ve lost friends, we’ve risked our jobs and reputations, but we will continue to savagely fight for our rights. As I’ve said previously and I’ll say today and I’ll say until the day I die, we women aren’t going anywhere, we are strong, we are resilient, we are loud. We are mothers, we are firefighters, we are trade unionists, we are Labor Party members and you ignore us at your peril.

← Into the 2018 Women’s Liberation Freedom Trash Can
Birth Strike: A Review →

2 comments for “The Left Colludes with Capitalism on “Gender Identity””