“The new French law further recognizes that prostitution harms all women (in prostitution or not) by undermining their emotional and physical wellbeing, security, health, and fundamental rights as human beings, harming society as a whole.”

Cherry Smiley, feminist activist and artist from the Thompson and Navajo nations, has published an article on Feminist Current taking on Amnesty International, Human Rights Watch, and New York Times writer Emily Bazelon for their support of prostitution. In April, Amnesty formally passed a resolution in favor of decriminalizing prostitution, including pimps and johns. A few weeks earlier Emily Bazelon had written a lengthy article in New York Times Magazine, that essentially comes down on the side of supporting and decriminalizing prostitution.

Neither Bazelon’s article nor Amnesty International’s “sex work” policy take into meaningful account the ways in which prostitution functions as a system of colonialism that disproportionately targets Indigenous women and girls. Through these policies and positions, prostitution is sanitized and whitewashed into “sex work,” leaving Indigenous women and girls and our sisters of colour to deal with the consequences….

Slowly, non-Indigenous people are beginning to understand the concept of “unceded territories” and acknowledge the exploitation of lands and “resources” that were forcibly removed from the care of Indigenous Peoples.

Male colonizers were thieves who took what wasn’t theirs because they believed they were entitled to it. But this entitlement didn’t stop at lands — these men decided they were also entitled to the bodies of Indigenous women and girls…[who] were targeted for prostitution in part because of lies told about them: they were “squaws” and “savages” who always wanted sex with white men. Prior to the invasion of North America, prostitution didn’t exist among the Indigenous Nations I have encountered.

Human Rights Watch also comes in for criticism from Smiley:

In her article, Bazelon quotes Liesl Gerntholtz, Executive Director of the Women’s Rights Division at Human Rights Watch (HRW), another organization that has taken a position supporting the total decriminalization of prostitution:

Gerntholtz and HRW have apparently concluded that it is impossible to imagine a world without prostitution and, in doing so, disregard Indigenous histories and send the message to Indigenous women and girls that we are not worth fighting for….

Unfortunately, Bazelon and HRW can’t (or won’t) challenge male entitlement. Instead, women and girls are told they simply need to find better and “safer” ways to accommodate unchallenged male entitlement to our bodies.

Watching these cases, Indigenous women and women of colour see that even a woman with white privilege received a horrific response to her sexual assault, leading us to ask, “If this happened to a woman with a relative level of privilege, what will happen to us?” Regardless of the race of the victim, what all women live through as victims of sexual assault and the ways our lives our constrained by male violence (or the threat of male violence) is a direct result of the patriarchal culture we live in. …

The fact that Indigenous women and girls survive at all in a genocidal culture that hates us and hates all women is nothing short of a victory. But we deserve more than just survival — we deserve fulfilling, joyful lives that are free from male violence or the threat of male violence. We deserve to engage in sexual acts of our choosing, with partners that we choose, who consider our humanity and pleasure, without any form of threat or coercion, economic or otherwise. All those who sell sex should of course be decriminalized and all women and girls should have access to the things we need to build those fulfilling, joyful lives, like safe and affordable housing, nutritious food and clean water, access to education and employment opportunities, and a recognition of our rights to our lands, languages, and cultures. 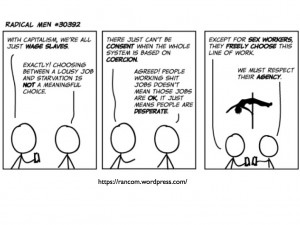 Over at the Huffington Post, Yaël Mellul, president of the association Femme & Libre, and Lise Bouvet, political scientist and philosopher, wrote an article clarifying and celebrating the country’s new law “inspired by” the “Nordic model” criminalizing the buyers but not the sellers of prostitution. They say the law, passed by the National Assembly by an amazing majority of 64-12, puts the country “in line with” the 1981 rape law that defines rape as “an act of sexual penetration, of any nature, committed upon the other person, with violence, coercion, threat or surprise.”:

The National Assembly has come to the decision that sexual intercourse for money is, by its nature, an act of coercion. It is therefore suggested that prostitution constitutes violence, and that it makes sense for the culprit of these imposed sexual relations — the client — to be penalized.

This law, which was proposed by a socialist MP, reinforces the fight against prostitution. Under the law, the client would be fined. This law shows that parliament has listened to the voices of prostitutes who have testified to being victims of mental and physical trauma as a result of encountering multiple unwanted sexual penetrations per day. Such mental and physical traumas are now well-documented in trauma studies. …

Common sense assumes that prostitution would be a harmless activity between consenting adults, when in fact, the opposite is true. Poverty, marginalization and violence are growing amongst these young women who are looking to sell their bodies. Our [France’s] elected officials have justly identified that the law that will prevail is not one that legalizes selling yourself, but a law that ensures that you would never be reduced to such a level in the first place. …

In fact, in countries where prostitution has been legalized and where pimps are considered to be ordinary entrepreneurs, female trafficking has exploded. Examples include Germany, Australia, Spain and the Netherlands. And for good reason: Once the demand has been normalized, nothing can stand in the way of the growth of the “market.” The MPs have felt that we must not regulate the crime — just as one does not regulate murder or slavery. We must give ourselves the means to fight it, even if we know that it will take some time to make the phenomenon disappear altogether. …

Without clients to purchase the prostitutes, there is no market, and therefore no need for pimping nor for human trafficking. It is unusual, therefore, for the pimps to be the only party penalized, as they are only second in the order of causality. The customers represent the main driving force behind the prostitution system and the violence that unfolds from it. They are directly responsible for the pimping and the human trade: The need for money constitutes a decisive coercion, even for those referred to as “volunteers.”

The writers conclude on a celebratory note:

This law stands for nothing less than to say that women are not goods to be sold or rented. In other words, it’s all about human dignity.

Therefore, it is with great enthusiasm that we revel in the passing of this new law, which will add to the legislative framework gender equality in France. And, it is with pride that we, the abolitionist feminists, have taken part in this anthropological rupture, which will lay the foundation for another world.

U.S. feminist/writer/professor emerita Janice Raymond, who testified at parliamentary committee hearings in Paris in 2009 in favor of the new French law, wrote that it recognizes prostitution as violence against women rather than as “sex work.”

In line with France’s historical record of human rights and abolitionist prostitution policy, the legislation also gives greater social protection and exit support to prostituted women. It offers them access to financial aid and grants temporary residence permits to foreign victims of trafficking…[and] strengthens France’s anti-pimping and procuring laws, unlike those of other countries, such as the Netherlands and New Zealand, where pimping and brothels are legal and where such legalization has abetted an increase in sex trafficking and organized crime. …

In passing a law based on the so-called Nordic model of prostitution legislation, which makes the buyers legally accountable, France follows Sweden, Norway and Iceland, countries that lead the world on strategic indicators of gender equality. France recognizes that if a country wants to further women’s right to be free of all forms of sexual exploitation, it is unacceptable to normalize one very significant form of exploitation by promoting prostitution as just another job.”

Raymond called passage of the law “a powerful rebuke to the policy proposals of more corporate-styled, well-financed and influential nongovernmental organizations such as Amnesty International.”

Comments are welcome (below) or contact us at MeetingGroundOnLine@verizon.net

← Backdraft from the U.S. Military Budget
The Judge Said →