It’s not easy or simple being a feminist during this election. Not that it ever is. But this has been a mind-boggler.

First there was the Bernie Sanders phenomenon. Although he held forth the possibility of someone in the driver’s seat who sounded like he would fight for many of the social and economic improvements we so badly need, feminism was not very visible on his agenda as such beyond his support of abortion rights. Nor was concern about racial oppression very visible, at least before the Black Lives Matter interruptions, even though women and people of color would certainly be among the major beneficiaries of the programs he championed, like the $15 minimum wage. On the other hand, he mostly has sided with the Democrats when it comes to voting for war funding. His record, though, is not as hawkish as that of Hillary Clinton, who seems to never have met a war she didn’t champion. 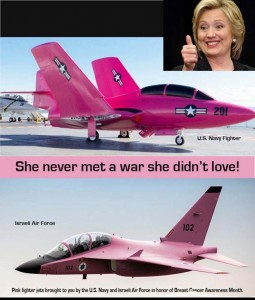 We quickly learned where most of the Democratic Party women and feminist elites stood! Everyone from Madeline Albright to Gloria Steinem to Elizabeth Warren to Oprah to NOW lined up behind Clinton, haranguing women who refused to support Hillary Clinton as the first woman candidate with a good chance at becoming president of the U.S. Albright even proclaimed that women who didn’t support Clinton because she is a woman should burn in hell. Assuming Albright believes in hell, I wonder where she thinks those who championed U.S. embargo policies that resulted in half a million dead children in Iraq will go.

Why would I vote for Clinton? She has been a water carrier for Wall Street and not someone who had done much even for U.S. women, while encouraging the raining of bombs down on our sisters at many spots around the world and advocating disastrous political and economic policies, like in Honduras and Haiti. Her wars of choice while Secretary of State and as a senator resulted in millions killed, wounded or forced to wander the earth as refugees. She also warred on poor women with her support for the end of “welfare as we know it” and the massive increase in the prison plantation. As a feminist, am I really obliged to ignore that?

Her campaign has been marred by its dirty tricks, especially against Sanders – leaving no doubt that she can get down in the dirt with the big boys. But for what ends? She can laugh with the worst of them over the brutal murder of another head of state (Libya, at the time one of the most women-friendly countries in the area) who got in the way of “American interests” and then have the nerve to complain that Putin hacked Democratic Party emails and interfered in our election. Are there any countries left on earth where the U.S. has not interfered, where the U.S. doesn’t have military bases to assure its wishes are carried out? Talk about interference! But many “peace women” easily set that aside when pushing their candidate. If it’s a woman president making war, will they feel better about it?

Then there’s the fact that Clinton has been the target of male harassment. The radical feminist in me knows I should defend her against that. The working class radical in me who hates most everything she stands for finds it hard to go out of my way to do it. When she says single payer healthcare is never going to happen or $12 an hour is enough while she scoops up millions, a part of me doesn’t give a hoot what men say about her. Women are a class vis-a-vis men, but rich women have economic class interests that make them “not just like us.” But of course, the sexist insults hurled at her really target all women and it’s not in my interest to ignore them.

Donald Trump is beyond the pale, period. Many of the things he has done, if done by someone not in the 1%, would have landed in him in hot water if not in jail. However, I’m not convinced he’s the more dangerous in the long run. His message of hate may encourage some pretty drastic deeds on the part of his supporters, but Clinton has nearly the whole ruling class on her side and so has the potential to do worse. They’ve paid her well for those speeches, and in campaign contributions, and she is bound to serve them well. That includes the anti-woman Saudis who apparently contributed generously to the Clinton Foundation, itself a fraud on U.S. taxpayers and probably illegal.

Trump’s sexual harassment of women – even bragging about sexual assault – is despicable (and perhaps actionable) and must not be tolerated. However, it’s not my only concern as I struggle to keep the full picture in perspective. To put it bluntly, would I prefer to have my pussy grabbed or be bombed? The thing is, my pussy is here and the bombs are mostly over there falling on other pussies. How do I fit that into the picture?

Consequently, I’m slogging through the muck and the fear and voting for Jill Stein. While I’m not exactly enthralled by the Green Party, it’s one way to say no to the horrors the duopoly has to offer while moving into building what we really need, though the Green Party as it exists may not be it. I’m also becoming convinced that opening the elections to viable alternative parties is going to require some changes in how we vote, like ranked voting and proportional representation.

While I may live to regret it if Trump wins as so many have warned me, I’ll take the chance and follow just not my conscience, but my head. The alternative is too horrible to contemplate. The awareness raised and damage done by what has been exposed about the two major parties in this astonishing election is immense. This combined with movements regenerated by Occupy, Black Lives Matter, the Dreamers, the fight for the $15 minimum wage, the Native American struggles against the pipelines and so forth, means possibilities are looking better for positive change in the electoral arena as long as the struggle outside it continues and improves.

← When Women Strike…
Responses to the Election →