As long as jobs pay poverty wages, the people who work those jobs will be poor.

As the argument grinds on about the minimum wage and

• or whether $15 is adequate (as Bernie Sanders wonders)

• and how it should be “phased in” over how many years—

burn this graphic into your brain and ask, Why aren’t they all equally aghast that anyone should be paid these PER HOUR “wages”? 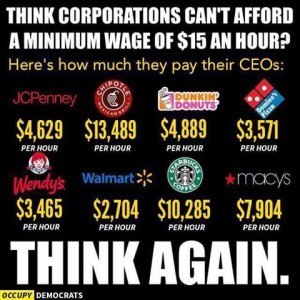 Wages are not what we “earn,” wages are what we are “paid.” Poorly paid people often do the dirty, often dangerous work most necessary to our existence and get paid the least, while the work gets cleaner and healthier as you go up the ladder. Really wealthy people at the top often get paid for doing little or nothing by living off the profits they make off the people who actually do the work.

Poorly paid people become the most exploited in other ways. Since Social Security payments are based on income on a sliding scale, they are very low for those paid low wages. The average monthly social security payment is around $1,345 while those few who have worked 35 years at the highest end of the Social Security table receive about twice as much. Those paid low wages (if they can even find work) receive little or nothing in their old age and don’t live as long, so they often collect even less. People at the top of the wealth ladder live more than a decade longer than those at the bottom, and thus end up collecting more of what they paid into the system.

As Kwame Ture (then Stokely Carmichael) put it in a 1977 speech:

Once you use the word “profit”…once you say, “I want profit” you must use the word “exploitation.” Profit can only be accumulated through exploitation. … Now you must understand something. The capitalist system is a remarkable system; it camouflages and delusions everywhere. It keeps you confused. …  For example… When I say that under the capitalist system there’s a constant conflict between capital and labor, capital seeking to dominate and exploit labor, people say, “That’s not true.”

The other day I said it and a man said to me, “Why, that’s not true. Money makes money.”

[The quote above is from the transcription of a speech given by Ture/Carmichael at the State University of New York at New Paltz in February 1977 and printed in Meeting Ground #2, May 1977. The conclusion of the speech is in #3, September 1977. Free PDF copies of these issues are available upon request from MeetingGroundOnLine@verizon.net]

My father was a trade unionist. I have no recollection of him drilling trade unionism into us as kids. But I have the clearest memory of him planting flowers in our garden and then planting a small coin. We watched the flowers grow and he dug up the coin. He showed us that if you plant flowers, they grow. But if you plant money in the soil, it doesn’t. Money only grows when you plant it on the backs of working people. My father died when I was nine but I never forgot that.

← #More Than Mean
Left Behind →

1 comment for “It’s What You’re PAID, Not What You EARN!”