“The Group-Made Man” [and Woman]

In the late 19th century, when the ideology of “the self-made man” was sweeping the United States, propagated by the dime novels of Horatio Alger and the “rags-to-riches” biographies of the likes of Andrew Carnegie, the labor movement put forward a vision of “the group-made man”, the worker whose job description, working conditions, hours and wages were the results of collective struggles and collective bargaining.  Rare was the worker, even the most skilled, who imagined that he had the strength to make a favorable deal with the boss on his own.

— “We vs. Me in the Days of Lean and Mean” by Peter Rachleff, MRzine 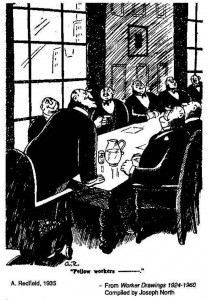 During the 2016 Democratic National Convention, four major labor unions broke from the AFL-CIO Labor Caucus and caucused separately. … It’s part of a broader shift in American labor — a drift away from class-conscious unionism, unionism that believes fighting corporate power and the 1 percent is an unavoidable necessity. …

A labor movement without a class analysis is one doomed to confusion and failure as a result. The neoliberal caucus at the Democratic National Convention is another step in that direction. … The caucus break represents the culmination of a long, steady trend in American trade unionism toward neoliberal unionism — a unionism that espouses collaboration with corporations instead of conflict and upholds free-market capitalism as reconcilable with labor’s interests.

Unfortunately, while the cancer may be most developed in the four breakaway unions, it isn’t confined there. It infects all too much of the institutional labor movement. But militant struggle against neoliberalism within the movement can stem the tide, such as Labor For Bernie’s success in keeping the AFL-CIO at least neutral in the primary. In the past year over one hundred local unions, several internationals, and countless rank-and-file activists endorsed Sanders and coalesced as Labor For Bernie in an upstart rejection of status-quo conservative unionism.

[L]abor activists must broaden the struggle to fight against not only corporations, but also corporate-minded politicians and unionists. Union members and leaders must do everything in their power to halt the march of neoliberal unionism, before they march the labor movement straight into its grave.

If People Could See…

Working in the fields is not itself a degrading job. It’s hard, but if you’re given regular hours, better pay, decent housing, unemployment and medical compensation, pension plans — we’d have a very relaxed way of living. But the growers don’t recognize us as persons. That’s the worst thing, the way they treat you. Like we have no brains.

Now we see they have no brains. They have only a wallet in their head. The more you squeeze it, the more they cry out.

If we had proper compensation, we wouldn’t have to be working 17 hours and following the crops. We could stay in one area and it would give us real roots.

If people could see — in winter, ice on the fields — we’d be on our knees all day long. We’d build fires and warm up real fast and go back onto the ice. We’d be picking watermelons in 105 degrees all day long. When people have melons or cucumbers or carrot or lettuce, they don’t know how they get on their table and the consequences to the people who picked it.

If I had enough money, I would take busloads of people out to the fields and into the labor camps. Then they’d know how that fine salad got on their table.

Many people…can probably remember a time when finding a good job meant showing up at a nearby factory or a business downtown. You didn’t always need a degree, and your competition was pretty much limited to your neighbors. If you worked hard, chances are you’d have a job for life, with a decent paycheck and good benefits and the occasional promotion. Maybe you’d even have the pride of seeing your kids work at the same company.”

That world has changed. And for many, the change has been painful. I’ve seen it in the shuttered windows of once booming factories and the vacant storefronts on once busy Main Streets. I’ve heard it in the frustrations of Americans who’ve seen their paychecks dwindle or their jobs disappear — proud men and women who feel like the rules have been changed in the middle of the game.”

They’re right. The rules have changed. In a single generation, revolutions in technology have transformed the way we live, work and do business. Steel mills that once needed 1,000 workers can now do the same work with 100. Today, just about any company can set up shop, hire workers and sell their products wherever there’s an Internet connection.”

…and How Globalization Itself Is Vulnerable

In order for globalization to be efficient, low pay isn’t necessarily enough, because you have to move products from one location to another. That required a change in the way products are moved – the “logistics revolution.” …

[T]o make it work, the industry has created logistics clusters. These are huge concentrations of warehouses where rail, truck, air, and water transportation meet and can be coordinated, usually electronically.

You might think, “Well, this is all very high-tech.” But it turns out that it still requires thousands and thousands of workers. In the United States there are sixty of these clusters, but three stand out: the Port of New York and New Jersey, the Los Angeles and Long Beach port area, and Chicago. Each of these employs, in a small geographic area, at least one hundred thousand people. …

The other thing is that these clusters are tied together by just-in-time systems – which means you have hundreds, maybe thousands, of points in the transportation system that are highly vulnerable. If you stop work in one place, you are going to close down huge areas. 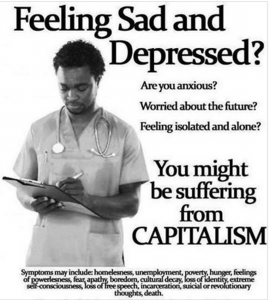 In her first job in San Francisco, Daniela was responsible for cleaning her employer’s home, caring for the children, driving her employer to work, running errands, and preparing meals. For Daniela, it felt as if she never stopped working. To make matters worse, she was verbally abused, and her employer confiscated her cell phone, forcing her to make any calls to her children and mother in secret.

[Daniela said] “Hopefully the [Domestic Worker’s] bill of rights will pass so that all of this ends, so that the abuses end, and one knows her rights. And so that the worker has some time for herself. Because there are many women who live where they work and really they are like slaves – you feel like a slave. You can’t say anything, move, or do anything because of your fear. The fear should end. One should be able to say things without having to be afraid.

Housework Is Not Just Women’s Work

[Daily People’s World writer Mary] Inman maintained that the 22 million housewives who worked only at home were not “kept women,” but did productive labor that benefited the capitalists by keeping male workers (and themselves if they also worked outside the home) ready and able to go to work. That is, the housewife produced the commodity “labor power” (and future labor power in the case of children) which is essentially “sold” to the employer by the husband in exchange for “an unacknowledged stipend in his salary” to “maintain” his wife and children–sometimes referred to as “the family wage.” (This has been the rationale for paying men more than women for doing the same work, though women who are the primary breadwinner of a household don’t receive this “stipend.”) …

While housework is productive and its fruits accrue to the capitalists, it also accrues to those husbands, mates, brothers, fathers and sons in the form of leisure time, the avoidance of often tedious, repetitious, unpleasant work, and the planning and general responsibility that goes with it, including being on call 24/7 if children are involved (and sometimes even for her demanding mate)–all of which would be costly to replace with waged labor out of his own paycheck. …

The idea that to truly liberate women, housework—collectivized outside the home or not—must be shared by men and women alike never made it onto the socialist/communist agendas, even in countries where women were encouraged into the workforce and such policies as public childcare centers and maternal leave were widely implemented. Getting women into the public labor force proved not to be enough. “Public” housework was still “women’s work” that men wanted little or no part of and most had the power to avoid. When childcare centers have been set up, for instance, in both capitalist and socialist countries, it has been mostly women who have ended up organizing and working in them, though those set up by women’s liberation activists often tried to included men. In the capitalist U.S., childcare is one of the lowest paying jobs, no doubt resulting from its history as “women’s work.”

— “Housework, Reproduction and Women’s Liberation ­– Part 2: Who Benefits from Housework” by Carol Hanisch