On September 7, the 48th anniversary of the 1968 Miss America Protest that marked the public burst of the Women’s Liberation Movement into U.S. consciousness, the online version of USA TODAY published an account with interviews, historic photos, and links that we thought you might find interesting.

Although the article “Miss America Protest: 6 Things You Probably Didn’t Learn in History Class” by Steph Solis is generally very good, it does get a few things wrong (not necessarily the fault of Solis):

•  The article implies Peggy Dobbins was one of the four who hung the banner during the TV broadcast of the event. It was hung by Kathie Sarachild, Lorraine Fletcher, myself and a fourth whose identity the Redstockings’ Women’s Liberation Archives for Action has been trying to track down. If you know the woman on the right in the white skirt in this photo, please contact the Redstockings Archives. Also let them know any information you have on who made the banner. 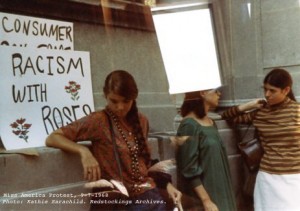 Twelve other women “plants” in the balcony joined us in the shouting of “No More Miss America”, “Women’s Liberation” and “Freedom for Women” as we hung the banner. The TV cameras did not film this part of the action, but there is a record of it, thanks to Bev Grant and New York Newsreel, which covered various kinds of radical demonstrations. (Bev was in NYRW, involved in the protest planning, and writer of several songs for it. She is still an activist/singer songwriter)

•  A photo caption (not written by the author) refers to the protesters as being from “the National Women’s Liberation PARTY”, a rather amusing moniker in view of our informally organized state at the time. While the protest was initiated by New York Radical Women, there were several women at the planning meetings and others on the organized buses to the event from New York City that we didn’t know. Other individuals and groups, some from as far as Detroit and Florida, came to protest.

•  Our term for the items tossed into the Freedom Trash Can was “items of FEMALE torture”–not “woman-torture” of just “torture.”

Online comments to the article, mostly by men, are the same type we heard on the picket line almost half a century ago, except now they’ve added ageism to their repertoire of insults. Similar insults were hurled at our foremothers a century before us as they too struggled for women’s liberation. Some samples:

This article is rehashing something that happened almost 50 years ago? How is it relavent today? Why not go interview them in the nursing home?

John, It is relavent today because these “bra burners” boobs now sag to below their navels and even lower and it is causing all kinds of back problems that are being paid for by the taxpayers of today.

And these guys don’t even seem ashamed to give their names (unless they are using pseudonyms).

“The Awful Truth: Miss America Is Back and Women’s Liberation Has Gone Missing” (2014)

“What Can Be Learned: A Critique of the Miss America Protest” (1968) with an interview by Fran Luck for the “Joy of Resistance” feminist radio, WBAI in New York City (2003)